Located in the central Mexican Highlands approximately 250miles due east of Guadalajara and the Lake Chapala area we had just visited (and, about 200 miles due North of Mexico City) is the newly ‘chic’ town of San Miguel de Allende. Altitude is even higher than the Lake Chapala area – approx. 2000 meters – so the Climate year round is nearly perfect. Its booming popularity in the past decade or so has seen this once sleepy little town grow into a cultural monument. Now home to scores of art galleries, dozens of high-class restaurants and bars, multiple theatres, a huge public library (including of course a vast english language section), and a weekly english newspaper called Atencion which publishes a calendar of events that is filled each day with so many entries you cannot ever be at a loss for things to do. It is no wonder that S.M.A. has become the destination for touristas and rentistas alike. Aesthetically and architecturally, it reminds us of a quaint European City, with numerous gardens, beautiful spired Churches and narrow hilly streets of stone. Easy to fall in love with, no doubt why so many ex pats now call it home, it has only one (but, unfortunately fatal) ‘negative’ that would probably prevent us from doing likewise – Prices have gone through the roof! It’s easily as expensive as Chicago (and, perhaps even as high as NY). Uggh. Bottom Line: GREAT place to visit -- just can't afford to live here! We’ll just have to watch our wallet for the 3 months we stay here.

We were greeted upon our late arrival in SMA, by one of the usual severe (but thankfully short-lived) thunderstorms that frequent the area during the summer ‘Rainy Season’, usually occurring only during the early evening hours (almost like clockwork arriving around 5 or 6pm). That was a fitting introduction to our first week here in SMA, where we encountered a couple of minor ‘fiascoes’. On our 3rd night here (Saturday evening), after another early evening rainstorm, due to the wet/muddy streets Nancy insisted that we drive our SUV close to the Old Town – even though it only saved us 3 or 4 blocks walk. We parked on a corner behind a line of other cars, dutifully checking the confusing street signs, that appeared to indicate it was ‘legal’. Normally, I’m not too concerned about such minutiae because with our Texas Plates, the Police in other towns usually ignored our car as they seem to know it is a waste of time to ticket cars from the States. But, as we learned the hard way, SMA is different. They have no hesitation about ticketing “Gringo” cars – in fact, as is now apparent we are probably ‘targets’ – and, their typical method of enforcement is to actually remove your plates and hold them at their Office in the Jardin, until you pay your ticket. That wouldn’t have been so bad, however we were especially 'fortunate'. Instead, in a rarely heard-of move, they chose to Tow our car. How rude? So, after an enjoyable evening out, we came back to our corner to find our car missing. We found a police officer in the Jardin, who radioed and confirmed our car was towed, and he explained we couldn’t retrieve it until the next day. So, early the next morning we trekked up the hills for 4 or 5kms (Nancy was pissed off and refused to take a Taxi and waste more money), until we came to the Bomberos (central Fire Station) where we were told the auto pound was located somewhere back behind it. In a stroke of good fortune, we went through the rear garage door of the Fire Station to ask for directions, and met the very kind Fire Chief. Nancy made up for her faux paux the evening before (i.e. insisting upon driving the 4 blocks), by wisely suggesting before we left on our trek, that I print out a picture from my Website of me in my old Police Officer uniform, and taking my old Police ID and a Note with us translated into Spanish that said something to the effect: “I am a retired Police Officer from the USA, just moving here to live in San Miguel. We thought we had parked legally, but if we were mistaken we apologize, and would request any professional courtesies you could offer”. Well, the Fire Chief radioed ahead to the Police Department on our behalf, and then drove us in his Fire Chief’s car to the Police Headquarters to obtain our paperwork. (We hadn’t been told the evening before that we needed to get paperwork first before picking up our car at the Pound). When we arrived at the PD, the Fire Chief interceded a little more with the Sergeant on duty, who then telephoned his own PD Chief. The PD Chief wasn’t quite as helpful, refusing to waive our Ticket Fine – but, with further persuasion by the Fire Chief, the additional Towing Fee was waived. Further, the Police Sergeant then proceeded to chaueffer us all over town in his squad car, to process more paperwork than we could have imagined (it would have taken us 4 or 5 Taxi rides and all day dealing with this without the official ‘escort’). The Ticket Fine was a modest US$25, so all-in-all not too painful a lesson. It sure helps to have ‘friends in high places’ – i.e. a little influence goes a long way.

Our second minor ‘fiasco’, was that our temporary housing in SMA that we had booked in advance sight-unseen on the internet, was not up to expectations. First, it didn’t have a clothes Dryer as advertised, which Nancy was quite understandably upset about. Second, it leaked like a sieve during the frequent rainstorms, through every window and orafice. We had to put towels on the floor everywhere to soak up the flooding. Third, the Hot Water heater had a gas leak that we thought was extremely dangerous, and the Landlord ignored our complaints to fix it. Finally, it was much smaller than imagined, and thus not too comfortable. After a bit of persuasion, we were able to work out an arrangement with the Landlord to leave and obtain a refund of our advance rent payments. Most fortunately, we found a really fantastic alternative housing that we are very pleased with. It’s a large 2bed 3bath lofted condo., with a large kitchen, dining room and living room, plus a Den; and, of course, a small shaded outdoor garden patio adjacent to the kitchen. There is also a large shared private gated courtyard, and the condo. neighbors are warm and friendly. As an added ‘bonus’ the place is actually a couple of hundred dollars cheaper per month rent! All’s well that ends well.

During the three weeks we have been in SMA, we have thoroughly toured the town taking the usual walking tours, also driving around the outskirts; and, naturally discovering some wonderful hole-in-the-wall restaurant favorites. We also have our favorite Bar, which has an extended Happy Hour from 5pm-9pm serving 2X1 drinks. It’s called the Limerick, and it is quite large, has comfortable cushioned couches and chairs, brick walls and lighting that give the place a Midievel look, large screened Satellite TV’s for sports etc., and even a free pool table. Definitely, a good place to unwind.

This past week we celebrated our 19th Wedding Anniversary – can anybody believe that? (Adding to Nancy’s mystique that she must be an Angel of some sorts - who else could put up with Bob for that long?! – and, lets not forget the added 5yrs she spent with him before marriage). On one of our walking tours, we had discovered this really quaint genuine Spanish (not Mexican) restaurant, which we reserved for our dinner. Of course, it was almost another ‘fiasco’, since the usually welcoming owner had failed to transfer our reservation from a scrap of paper he originally wrote it on when we stopped in, to his actual Calendar Book and then had forgotten about it. Miraculously, with only a minute to spare, we caught him outside on the street just after he had locked up and was about to leave. He said “no problem’, re-opened the place and couldn’t have been a warmer host/chef/cook. It was one of the best meals either of us have ever had. It is a price fix restaurant, and includes as appetizers, assorted plates of home-marinated/canned veggies (mushrooms, etc.), assorted cheeses, and fine spanish Jamon. He gives you your choice of entrées – which that evening, included seafood Paella, Rabbit, and Roast Leg of Lamb. We chose the Paella and the Lamb, and without question, the Lamb was the finest ever. After finishing our included home-made spanish Wine, he serves an anise-flavored apéritif, and then for desert served Crème Brûlée with a lit candle. Absolutely delicious, and quite romantic especially having the restaurant and service all to ourselves. Hardly surprising, the heavens parted like Noah had returned for another 40-day rain that evening, so with no urging to leave by the owner who was busy cleaning up leaks, we hung out for about 3 hrs until we lost patience, and ventured out into the stormy night to go home. Fighting much competition, we found a cab after 10 or 15 soaked-minutes, and made it home without drowning! (LOL)

Later in the week, we visited one of the natural hot-spring spas just a few minutes outside town, called Escondido. Very cool (or, should I say warm). The place is designed with multiple small connecting pools and stone walkways, some indoor under multiple domes with rays of light streaming in through small openings in the roof (reminded us of Raiders of the Lost Ark). In addition to the stone walkways throughout the beautiful gardens and grounds laden with ponds containing flowering lily pads, both the indoor and outdoor pools, have intricate private tunnel connections, where on an uncrowded weekday you can have some romantic privacy. Finally, in most of the pools, there are jet streams of source-fed luke-hot water pumping out of pipes into the pools, that you can stand under and get a ‘cheap’ massage. Very relaxing, and well worth the visit.

Next on our Agenda while temporarily residing in SMA: A visit to the nearby UNESCO World Heritage small Cities of Guanajuato and Queratero. We understand that both of these cities have a lot to offer in terms of culture, architectural wonders, and promise to be possible venues for future visits (if not potential permanent resident sites).

Pics of the Town: 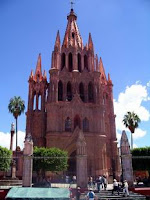 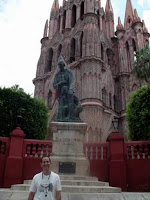 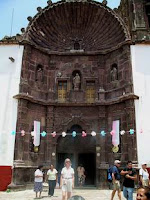 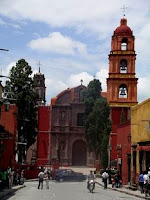 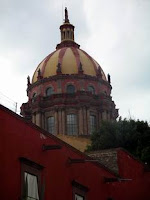 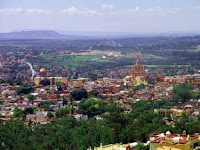 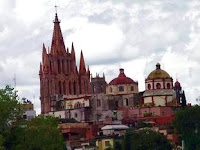 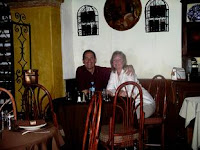 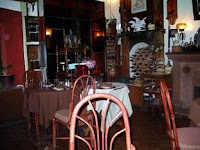 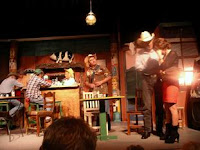 Our rental Condo in San Miguel: 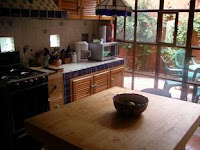 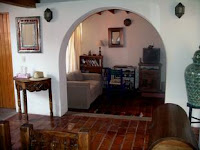 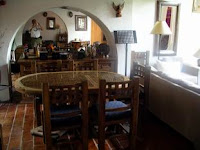 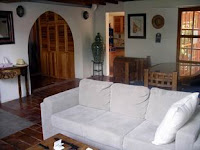 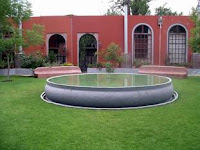 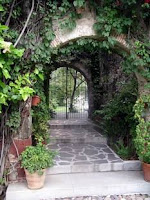 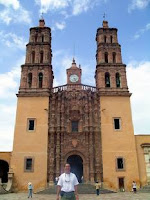 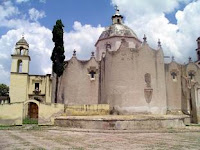 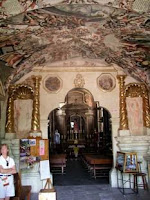 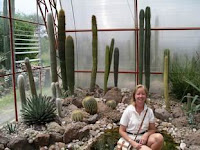 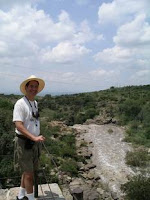 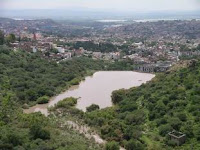