4/29 – 4/30/11) We were very lucky to find a great airfare from Antalya Turkey back to the West Coast of the States, with an overnight stopover in Rome. Naturally, we have have been to Rome before so it was nothing new for us, but still had a leisurely half-day to tour around the central historical area of the city, strolling past Piazza Venezia, the Roman Forum, and the Colosseum. Then we found a fairly good restaurant serving basic Roman fare, to celebrate the 3rd “Anniversary” of our World Travel Adventure. (Yup, hard to believe, but true … we left our life in Chicago 3 years ago, and after stopping in Dallas TX to take care of business, we crossed the border into Mexico on April 30, 2008 – beginning our long international adventure). (Sorry, Nancy forbid any photos of us in Rome due to our ‘travel look’ from having arisen early, and long day of travel and strolling, etc.).

NEXT UP: We're Back (in the USA) ... Will our Travel Adventure finally be coming to an end?

Our plan is to initially spend 4-6weeks in Southern California (Orange County), where Bob is pursuing some employment opportunities in Law Enforcement. If any pan out, we would obviously stay in the area and Nancy would then also look for a job. Otherwise we’ll probably once again head back up to the Pacific Northwest (Portland or Seattle) for at least the next several months; and, both of us intend to look for some kind of employment, to rejuvenate our productivity and also help to offset some of our expenses – especially, while staying in the far costlier USA. But we are blessed to feel that we now have the freedom (financial and otherwise) to take it or leave it, and stay or not stay, work or not work, and simply follow our dreams. We still like the idea of annually spending mid-October thru mid-February in Chiang Mai Thailand (and, then a few months after that perhaps in our next favorite place of Buenos Aires); and, then perhaps returning every year to the States at the same time. But, if Bob is successful in obtaining a new full-time position in Law Enforcement, we would obviously stay put save for annual vacations (at least until, our full Retirements in the future), and Nancy would also return to gainful employment.

(4/3 – 4/29/11) This was our second visit to Turkey, the last time in Fall of 2002 on a ‘regular’ 16-day vacation while we were still living in Chicago. At that time, we flew into Istanbul stayed for 4 or 5 days, then rented a car and traveled down the Aegean coast with stops in Ephesus, Fethiye, Bodrum, the famous Blue Lagoon in Oludeniz, Pamukalle, and Kas. Then back to Istanbul. We always regretted running out of time to reach the Mediterranean resort city of Antalya.

Now, we finally had our chance since it was a short distance directly across from where we were last staying northern Cyprus. So we took a short non-stop commuter flight direct from Cyprus to Antalya, after finding a very reasonable 2BR apartment duplex rental in a nice residential neighborhood only 3 blocks from the famed miles long Konyaalti Beach. Of course, it was still a bit early and not quite warm enough for ‘beach season’ which would probably begin in earnest a few weeks after we would leave. But, then again, we’re not really ‘beach people’. However, it did make a wonderful walk to stroll along the oceanfront promenade that was just beginning to come to life with the opening of the beachfront cafes.

Antalya is truly a beautiful city, perfectly situated on a bay just around the bend from where the Aegean meets with the Mediterranean. The waters of course are crystal clear with a deep blue color, with a spectacular view of the surrounding Taurus Mountains. And, then there is Kaleici, the restored historical center of the city consisting of narrow winding streets situated on low lying cliffs overlooking the very pretty quaint Harbor leading out into the bay and Mediterranean Gulf. But the city spreads out in all directions, and is quite large for a ‘resort city’, with a total population actually now exceeding 1 Million people. Indeed, we were impressed with its diverse and bustling commercial activity, that would be very amenable for those seeking pursue new business opportunities.

Naturally, the City itself has several historical monuments and sights of interest, including Hadrian’s Gate (a/k/a the Triple Gate) constructed by the Romans in the 2nd century , the Clock Tower, Hidirlik Tower thought to have originally built in the Hellinistic period (300-150 B.C.), Kesik Minare (a/k/a the broken Minaret), and Yvli Minare (the fluted Minaret) decorated with dark blue and turquoise tiles which became the symbol of the City.

Within easy reach of the city for day trips are also several well-known archeological sites which we had an opportunity to visit, including the ancient city ruins of Perge, Side and Olympos (not to be confused with Mt. Olympus), the last two of which we found to be most impressive and worthwhile. Another beautiful day trip (actually merely on the northern outskirts of the City) is the Duden Waterfall park that is an excellent place to unwind and picnic.

As for the food, it is of course standard Mediterranean fare, largely consisting of Kabobs (chicken, lamb, kofte or beef), doner (wraps), fresh fish (usually grilled) pita, mesa dips and vegetable appetizers, Corba (soups),excellent fresh salads, and Lahmacun (crisp baked flat bread topped with various toppings of meats, veggies and sauce – sort of the turkish version of pizza), and of course baklava for desert. We do love it. As for drink, unfortunately the Turks have not in our opinion learned to make good wine (and if it will make them feel better, neither have the Greeks - LOL). C’est La Vie. Nobody’s perfect. But, we do like to sip their Raki as an aperitif or after-dinner drink, which is the Turkish version of the anise-flavored liqueur, similar to other countries e.g. Ouzu, Sambuca, Arak. As for value, unfortunately Antalya is no doubt affected by its resort status and prices are probably on par with Chicago for groceries and restaurants.

All in all, we were happy to finally have the opportunity to visit Antalya, and enjoyed our stay. We would definitely recommend it if you are in the region, but otherwise for us I don’t think we’d go out of our way to make it a must-go repeat destination like we do feel about Chiang Mai or Buenos Aires.

NEXT UP: We celebrate the 3-yr “Anniversary” of our World Travel Adventure, with an overnight stopover in Rome on our way back to the States. Our plan is to initially stay in Southern California, where Bob is making some job inquiries (in Law Enforcement). If they pan out, we will permanently settle back down and end our travels. Otherwise we may head back up again head back up to the Pacific Northwest (Portland or Seattle). After that, we'll see what's in store for us. 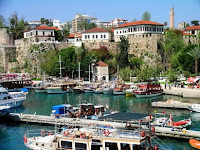 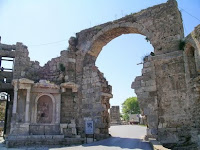 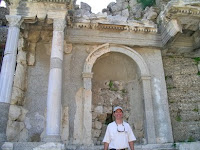 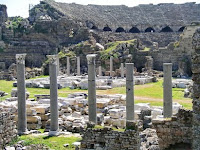 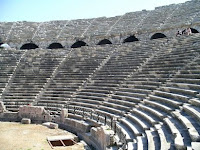 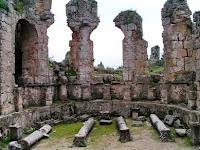 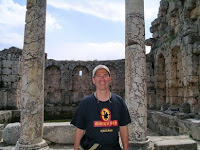 Posted by Bob and Nancy Morton at 4:09 PM No comments: