It’s our last day here in Jocotepec, and of course we’re busy packing up to leave. Frankly, we’re both anxious to leave and looking forward to our next home. While it has generally been a pleasant stay and a good place to acclimate to international living, we are not sorry to be leaving for several reasons. First and foremost, of course, we have our tragically sad memory of Tony’s passing in this place. Second, with respect to the home itself, though it had a wonderful garden and view, the furnishings were something less than desireable in terms of comfort and lack of certain expected amenities (e.g. Satellite or Cable TV, Microwave, BBQ, etc). Third, the locale, specifically Jocotepec but more generally the entire Lake Chapala/Guadalajara area. Jocotepec is at the very far end of the Lake Chapala area, and is the least commercially developed as compared with its larger and more well-known neighbors of Lake Chapala and Ajijic. So, there are really no decent restaurants in the town nor any decent bars or other hangouts, though the town square is very nice. If we had to do it over again, we definitely would have chosen to stay in Ajijic, which is the most "happening" of the towns. Unfortunately, we didn’t know any better when we booked our stay. C’est La Vie. But even living in Ajijic (or anywhere else in the Lake Chapala or Gaudaljara area) is not likely to be on our future agenda. For the most part, besides local Mexicans the area is inhabited primarily by retired gringos from the north, and we’re not quite ready to fit into that crowd or way of life. Lake Chapala and Ajijic in our opinion simply don’t offer enough stimulation. As for Guadalajara, though it does have the culture and activities, its overpopulation and traffic congestion far outweigh the positives. All that being said, our stay here was certainly not without some pleasant memories, which are detailed in our earlier blog chapters.

Next stop: San Miguel de Allende (about 6hrs due east of Jocotepec; about 200miles due north of Mexico City; still in the Highlands where the climate is still perfect; and, in close proximity to two World Heritage small cities of Queretaro and Guanajuato -- which we will definately visit with an eye towards possible future stays)

Posted by Bob and Nancy Morton at 1:13 PM No comments:

Bob's Family Comes for a Visit

Bob's sister Leslie joined by her new husband Junsan (married just last August), as well Andrew, Bob's youngest of only two 1st-Cousins from Dallas, came to visit us for a week arriving on July 2 and departing on July 9. Prior to their arrival we were a bit concerned about the weather forecasts predicting rain and thunderstorms all week due to a hurricane that had just struck the pacific coast almost due west of us. The Satellite photos of Mexico showed complete cloud cover with the whirling hurricane quite visible and strong on the coast. But the weather "Gods" must have been looking kindly on our family visitors, because miraculously they got 5 nice days, with the only rainy days right at the end of their stay. (Typical for the Rainy Season in the Mexican Highlands, which began in June and ends around October, there was the usual nightly rain but then the days were nice and even hot. But the wonderful thing about the rainy season is that it keeps the temperature moderate in the day – usually no warmer than 85 or so – while the nights are pleasantly cool for sleeping. And aesthetically speaking, naturally all of the lush plantlife comes to life and turns the once brown hillsides into a bight green landscape).

The day of our family’s arrival was a ‘logistical nightmare’. Originally, Bob's cousin was scheduled to land at the airport only an hour ahead of Leslie's flight. However, when we awoke that morning, we had a voicemail waiting from Andrew advising that his flight had been cancelled after he had boarded, due to a cracked windshield. He was then rescheduled to land about 2 hours after Leslie’s flight. In the meantime, immediately after we had left for the airport to meet her, our used Ford Explorer thought it was a good time to develop its first engine problem – engine light went on and car started sputtering and knocking like crazy. After pulling over and checking under the hood and determining it wasn’t the oil or radiator, we drove slowly ahead for about a mile (hoping it wouldn’t just conk out on the side of the road), until I pulled into a BF Goodrich service station. The Mechanic immediately spotted that two of the cords to the Distributor Cap had severed (either worn thru or melted?) and a third was about to. Miraculously, they advised that although the part was not in stock they could have it delivered to the station within about 1/2hr. And, they were willing to work on it promptly upon getting the part. But the repair still took about 2 ½ hrs; which of course, made us that late to meet up with Bob's sister at the airport – who had been expecting us to be there since Andrew was supposed to arrive first. Since we had no way of getting in touch with her to tell her we would be late, she was totally panicked when we finally arrived (fortunately, though, she and Junsan had stayed at the airport and waited or it would have been even more problematic). Then, we all had to wait at the airport for Andrew’s plane which of course was further delayed by about another hour. At least everyone (including us) arrived safe.

However, our SUV was not fixed properly afterall, the engine light remained on and the car continued to sputter and have difficulty climbing the hills back to the lakeside – we all prayed it would make it back to our house and not break down in middle of nowhere. Fortunately, we made it back ok and even in time to pick up our favorite Wednesday ‘special’ meal of Roast Chicken, with roasted jalapinos, potatoes and tortillas.

After the initial pre-arrival and arrival ‘problemos", on alternate days we took our family on several of the usual ‘tours’ – the lakeside tour to our neighboring towns of Ajijic and Chapala; the shopping district of Tlaquepaque; and, the central historical district of Guadalajara (including a new adventure for us of the central market "Mercado Libertad").

In addition, cousin Andrew who is fluent in Spanish, ventured out several times on his own including a full day into Gaudalajara, Indeed, he gave us a little bit of a fright when he left one morning by 7:30am before any of us even got up and did not return until 11pm when we had all already retired to bed. But, he did make it back safely and said he had a good time.

Leslie and Junsan, on the other hand, became ‘local fixtures’ in our little town of Jocotepec despite being here only a week. They got to know many of the locals (both "Gringos" and some of the english-speaking Mexicans), when they would enjoy a strong cup of locally brewed coffee every morning in the town square, and wander out at night for their evening ice cream.

We also enjoyed playing some games at night with everyone, including Backgammon, Dominoes, Hearts, and a final late night of Monopoly. As it turns out, Junsan is quite a ‘natural’ at games, quickly learning even new ones on the fly and always a contender. (Bob will have to invite him to join him and his usual ‘gambling partner" Mike Shaker when they go to Vegas again sometime, to see if he can match Bob's skills at Poker and Blackjack).

All-in-all, we thought it was an enjoyable week for everyone, albeit with a few to-be-expected minor and short-lived ‘family bickering’. In the process, we got to celebrate Leslie's Birthday together down here in Mexico; and, Leslie got a glimpse of what our new life abroad is like (and, get over her 'fears' -- and, even experience some of the 'joys' of world travel, including all the interesting new people you get to meet!) 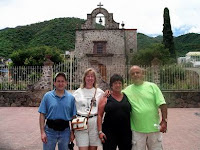 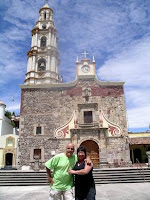 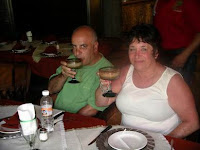 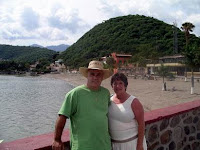 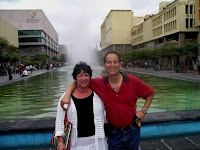 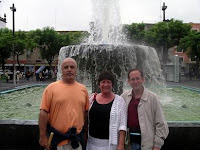 Posted by Bob and Nancy Morton at 11:08 AM No comments: