The Island of CYPRUS

(3/1/11 – 4/3/11) As most folks are aware, Cyprus is an Island divided between two peoples. The Greeks control the south, and the Turks control the north. Technically both halves are independent sovereign entities, but in actuality each owes their allegiance if not financial viability to their ‘mother’ countries of Greece and Turkey respectively. Once united, in 1974 civil war broke out on the Island and the Island has been divided ever since. Though formal military hostilities have long since ceased, vestiges still remain visible, and each side still maintains numerous fully equipped and battle ready installations. But the border controls between the two halves has now relaxed and there is a very liberal free-flow of people from north to south with only minimal formalities. The southern Greek side is officially recognized by the UN, while the north is somewhat frowned upon. Personally, don’t take sides because we just feel it is an unfortunate dispute between neighbors, both of whom (Turkey and Greece) are very close American allies and members of NATO, and we have visited both ‘mother’ countries and feel warmly towards both peoples. Therefore, even though it is somewhat ‘controversial’, we chose to stay in the north, officially known as the Turkish Republic of Northern Cyprus (TRNC). Our decision was based on research that indicated it to be the better value, and that it is less developed and less touristy which we prefer.

We flew into the southern city of Larnaka (on the Greek side) because their airport is internationally recognized and most international airlines arrive there. But, we immediately proceeded to travel due north by local bus to the central city of Nicosia/Lefkosia that is divided between the two nationalities. We then had to walk across the border and take different transportation for the remainder of our journey north, to the city of Girne a/k/a Kyrenia. (FYI – strangely, all of the major cities in the north are known by two different names). Our rental apartment was on the outskirts of the city about 10 minutes drive west towards the town of Lapte. The locale, if not ideal for us, was still very accessible to everything by means of the very frequent private transport mini-buses/vans known as Dolmush. We also had two good-sized and well-stocked supermarkets within walking distance of our apartment. Also located only 2 blocks walk from our apartment, was a nice beach on the Mediterranean coast along with several restaurants. However, this time of year is early Spring in Cyprus and still the off-season, and far too cool for beach lounging or swimming and other water sports. As we are not really beach-lounging type of travelers, that didn’t really matter to us (although we do lover our water sports, especially snorkeling and scuba diving when available).

What Nancy and I do love to do is explore, and take in the sites including natural, archeological, architectural (and, of course, Gastronomical). Unfortunately, on that score, we would have to rate Cyprus as ‘below average’. Although there are a few mountaintop castles, interesting old abbeys and churches, as some actual archeological monuments, compared to other places we have been (especially in both mainland Greece and Turkey), Cyprus is somewhat dull. We went to all corners of the north, including the western city of Guzelyurt/Morphou, the central capital of Nicosia/Lefkosia, our local north central city of Girne/Kyrenia, and the western city of Farmagusta/Gazimagusa, but in all honest found each only of real interest for a couple of hours walk. Of course, we thought the quaint Harbor in our own city of Girne/Kyrenia was pretty, especially as it abuts the ruins of the Kyrenia Castle. And, we enjoyed our walking tours of both side of the capital city of Nicosia/Lefkosia, especially the old sections. While Farmagusta with its walled central ‘old city’ was probably the most ‘archeological-worthy’ because of the concentration of and quality of the ruins and monuments within its confines. The only area of the north we didn’t have an opportunity to see, which we would have liked, was the far northeastern peninsula, which is said to be pretty due to its lack of development, but which proved to be impractical to reach and explore by public transport. We would have rented a car for a day, but inexplicably no rental agency in Cyprus (or at least northern Cyprus) will rent for less than a minimum 3-days, which we did not require.

Naturally we love the cuisine of Cyprus, which is a combination of Greek and Turkish Mediterranean, including the ever popular beef and lamb kabobs and donars (wraps), roast chicken marinated in tomato based herb, grilled fish, rice and meat stuffed Zuchinis or Peppers or rolled in grape leaves (Dolma/dolmades), and the obligatory variety of appetizers known as Maize (olives, cheeses, sausage, sliced or salted meats, artichoke hearts, etc.). But alas, it was not unexpectedly quite expensive here in Cyprus, so we rarely ate out, and Nancy as usual tried her best to make some ‘local’ type dishes. In sum, Cyprus is a fairly pretty Island, with wonderful people, but probably best left to the beach-loving tourists visiting for a week’s R&R, rather than explorers and adventure seekers (other than water sport adventures in the summer months). Certainly, it would not be a place we would consider for any long-term stays, nor even go out of our way for a return visit (unless you happen to be in the ‘neighborhood’).

NEXT STOP: The City of ANTALYA, on the southern Mediterranean coast of mainland TURKEY. 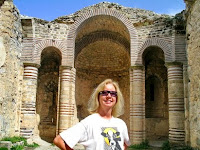 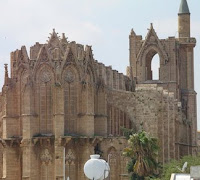 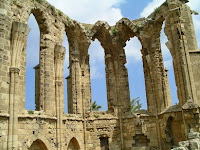 Posted by Bob and Nancy Morton at 8:03 AM No comments: