(3/14-4/15/09) On March 14, we flew from Panama to Managua International Airport; and, took an airport transfer van approximately 45 mins. to the colonial town of Granada. We never saw any "city" as we drove through the capital, because it is spread out style "Los Angeles" with virtually no high-rises. Any hint of a "downtown" was swept away by the last major earthquake in 1972 – one of several it is endured in its history. In fact, this small country is a geothermal ‘paradise’ centered over major tectonic plate fault lines, and more than a dozen Volcanoes, some still quite active and subject to frequent minor eruptions and the ever-present danger of a major eruption.We met up with our property manager, and he led our Van to our pre-booked rental home. Although it looked very nice from the pictures on the advertised website, we discovered upon our arrival that is was in a less-desirable and secluded neighborhood, and its open-to-the-outdoors downstairs living areas turned the home into a ‘hot house’. (Because it was open to the outdoors through the central courtyard, no air conditioning was even possible, and the two ceiling fans would do little to help). In addition, the advertised "internet access" was in actuality sharing the across-the-street neighbor’s wireless router – when you could get a signal, and when the neighbor’s children were not using up all of the available bandwidth themselves. Bottom line, we knew immediately that staying in this rental home was not going to be a very pleasant experience. Fortunately, the owner is a very reasonable and flexible fellow, who also happens to own another property in Granada, this one a Hotel/Condominium complex, with a beautiful swimming pool, complete with a "Tiki Hut" bar, ever-present friendly and helpful staff, and the camaraderie of mostly friendly/nice fellow occupants. So, with the owner’s permission, and only a modest additional rental fee, we made the switch to the 2BR 2Bath, LR/DR, kitchen, Condo (actually, the owner’s own unit, since he is back in the States at this time). Good move. Been very happy about our Stay here.

Granada itself, is a relatively small colonial town easily seen in a few hours walk, and is still ‘developing’ its tourist infrastructure. It is situated at the water’s edge of the huge Lake Nicaragua – the 2nd biggest fresh water lake in Central America – and unique in its freshwater sharks, sawtooth fish, and pre-historic gar, along with the usual Bass. Unfortunately, much of it is too polluted to make swimming safe let alone eating its fish. Much smaller than San Miguel (in Mexico), though with more restaurants, bars and ‘action’ than our first rental home in Jocotepec Mexico. Still, it’s a bit too ‘slow’ for my tastes (at least for a very long-term stay), but pleasant for a shorter visit. And, though it is just as HOT and humid as Panama City (indeed, we haven’t had a single drop of rain during our entire month’s stay, with daily highs that have hovered between 90 – 95F), nevertheless we have enjoyed far more than Panama. Why? Partly due to the smaller town versus large miami-like city of Panama, partly due to the comfortable and friendly Condo complex we wisely switched to, and partly due to more accessible eco-adventures and surrounding villages to tour.

Ever-visible from most of Granada looms the dormant Mombacho Volcano. A short ride on the locally known "Chicken" Buses for about 50cents, where you can be dropped off near the 2km dirt-road that leads to the entrance of the National Park Reserve. Then, you can either hike or take a "Tuk Tuk" 3-wheeler hooded taxi to the Park’s entrance and ticket office. The fee for the Park, includes a 45min. ride in the back of a large open truck up the long steep dirt road to the top, which passes through beautiful coffee plantations, and thick tropical trees and vegetation, where almost always you will see a family of howler monkeys up above you in the trees. Once at the top, there are 5km of hiking trails through even thicker jungles, with occasional Miradors (look-out points), with views of either Lake Nicaragua, Laguna de Apoyo (a clean and pretty volcanic lagoon), and volcanic fissures. The hike is really amazing, and you know you are truly in a tropical jungle; taking caution to avoid the real possibility of a poisonous snake or similar hazards along the way.

We also took the "Chicken" Bus to the nearby town of Masaya, which hosts a huge local Market, containing everything from clothes, to hardware, fruits and vegetables, arts and crafts, and of course ‘tipico’ food stalls. We spent several hours getting lost in the maize of aisles, before taking another Bus to even smaller towns that dot Mobacho Volcano’s hillsides. One in particular, Catarina, is renowned for its many horticultural nurseries, where folks from all over Nicaragua supposedly come to buy their garden flowers and plants. Up the winding road to the top of the town, you reach a Mirador with an amazing view over Laguna de Apoyo, where you can enjoy a lazy lunch at one of the many touristy restaurants. But watch your wallet, because in two separate visits it became evident that the restaurateurs (2 different ones) make a habit of significantly overcharging on the bill, and only after considerable argument do they finally acknowledge any ‘error’. Not to worry, just part of the local ‘charm’ .

We also spent a wonderfully pleasant day lounging and swimming at the Bearded Monkey Hostel with a private beach on the shores of the Laguna de Apoyo, complete with lounge chairs under shady tropical trees, inner tubes, plastic kayaks, diving platform, swimming platform, hammocks, etc. The Laguna is renowned to be the cleanest swimming hole in Nicaragua, and maintains a perfect temperature due to thermal volcanic vents that warm the otherwise frigid waters of this spring-fed lagoon. Surprisingly, the lagoon has no motor boats (apparently they are prohibited), and very little development despite its natural beauty. In the States, the land would be snapped up and developed in a second, and no doubt look like Lake Geneva in Wisconsin, albeit far more scenic.

Of course, our good friend Mike Shaker (of Monk’s Pub in Chicago), once again came for a visit (his 4th), this time no doubt out of a sense of ‘moral obligation’ since it was he who recommended we come to Granada. Actually, he and we, always have an amazing time when he visits. And, this time was no exception. Though Granada did not offer him the ‘dining experience’ he would have preferred, the day tours and adventures most certainly made up for that. Besides taking him back to the top of Mombacho for a repeat of our initial jungle hike, we had a blast when we all went Zip-Lining above the jungle canopy from platform to platform built high up into the top of the trees. Nancy definitely won kudos for her Tarzana antics, when she flew like a bird hanging stomach done one time, and then upside-down another. Neither Mike nor Bob could quite get up the ‘courage’ to do likewise (actually, the truth of the matter was, neither of our spines could handle hanging by a rope that way – very painful). Got some great pics, of all of us and even a short movie clip of Nancy doing her thing.

Then Mike rented a small 4-wheel SUV, and we took 2 good road trips. First, we drove north to Leon, about 2.75hrs, which is supposed to be the ‘cultural capital’ of Nicaragua, and where the University is located. Though its central colonial heart, contained some nice architecure and churches, none of us were too impressed. On top of all that, it is at a lower elevation than Granada, nearly sea level, and so is even hotter than Granada. On the day we were visiting, temperatures were about 105F. No thanks. Walked a few blocks, took a few pictures, had a nice lunch, and then it was "Hasta Luego Baby".

The other big road trip, was south about 1.75hrs to San Juan Del Sur, Nicaragua’s best pacific coast beach town. Though there is a really nice bay and beach in the center of town, we were told to avoid swimming there due to pollution. So, we just strolled the walkways, and had a pleasant seafood lunch – made pleasant mostly by the view and the company – the food was at best so-so – at worst, some fear we all might get ‘sick’. Luckily, that didn’t happen. But, still a nice day.Our other big adventure during Mike’s visit, was a drive to the nearby Masaya Volcano, reputed to be the most accessible active volcano in the world. It did not disappoint. We were able to drive our SUV all the way up to the very top of the volcanic crater, through fields of lava from eruptions past. At the top, you could climb a steep set of steps up a dirt hill, for a view right down into the crater’s smoking hole. And, smoke it did. Every few minutes, wafts of thick sulfurous fumes would spew out of the hole, sometimes so thick you couldn’t see anything else. They also warn you to only visit for no more than 20mins. due to the lung irritation from the smoke. Further warnings advise you to be prepared for quick get away, if the Volcano decides to cough up more than just smoke, which literally can and does happen not so infrequently. You are even required to park you car facing outwards for easy exit. Though we couldn’t see it in the daylight, they say at night you can pear into the crater and see the glowing lava. Either way, it was a very cool (hot?) experience!

In sum, Nicaragua is a really beautiful tropical country, with some awesome natural wonders, definitely worthy of a recommended visit. Would I consider living here? No, but it was never on our agenda, and was only visited on a lark and the recommendation of our friend Mike, when we told him we were leaving Panama earlier than expected, and needed to ‘kill time’ before we go on to Ecuador where the rainy season doesn’t end until the end of May. Now, on our own initiative, we are leaving Granada tomorrow (April 15) -- not because we didn’t enjoy our stay but because we wanted to see something new, while still ‘passing time’ waiting on our next intended longer-term destination of Ecuador).

So for our next destination, we are heading to the nearby Central American country of GUATEMALA, to live for 5 weeks in the colonial town of Antigua until May 21. From what we have read and seen from photos, Antigua appears almost to be a ‘nicer’ twin of Granada. That is to say, it is a colonial town similarly located close by to the capital of Guatemala City, once again situated at the base of a beautiful Volcano. Of course, the tropical landscape is expected to be similar. But we say ‘nicer’ twin, because Antigua has been a foreign tourist destination longer, far ahead in tourist infrastructure such as restaurants, etc. So we expect much more from it. In addition, it is at a higher elevation than Granada, so daily high temperatures are supposed to be a far more comfortable low to mid 80’sF. Should make it much more enjoyable; and, allow us to get out a lot more without melting. We are also hoping the grocery shopping will provide better and more diverse quality foods than we could find in Granada, and with any luck at better prices. (I didn’t mention, that surprisingly, despite Nicaragua being extremely poor, we found the grocery prices to be relatively expensive????). 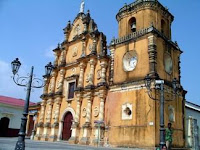 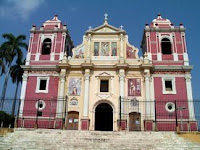 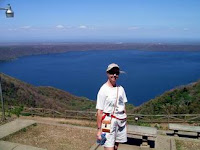 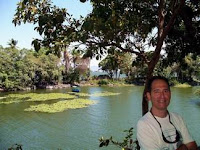 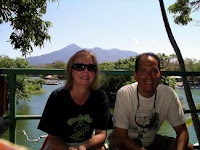 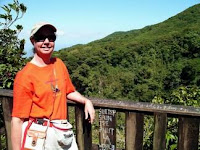 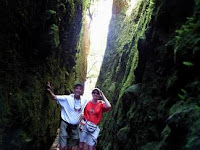 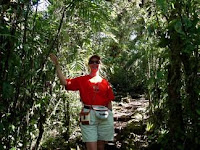 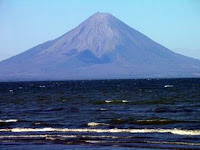 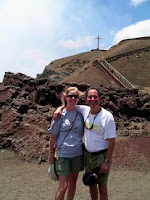 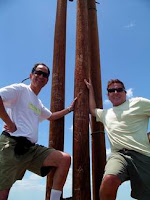 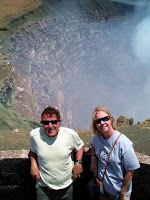 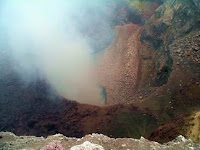 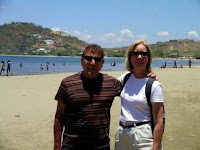 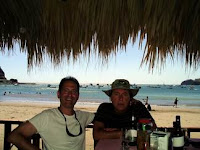 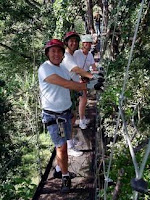 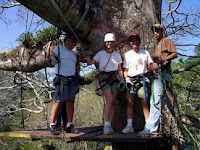 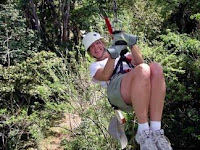 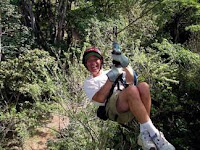 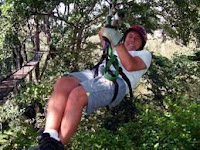 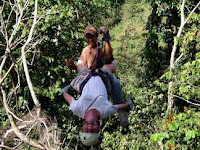 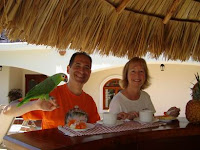 Click Play > to see: VIDEO of Nancy Zip-Lining thru the Jungle:

Posted by Bob and Nancy Morton at 2:05 PM No comments: