(4/15-5/21/09) Although only an hour’s flying time from Managua Nicaragua to Antigua Guatemala, our TACA Airlines flight on the evening of April 15, was to say the least not uneventful. About 2/3 of the way, no doubt over thick uninhabited jungles judging by the lack of any visible lights despite a clear night, we could hear the engines powering up and then down repeatedly for no apparent reason. Then, the seat belt light came on. And, less than 10 secs. later we must have hit a major air pocket which caused the plane to suddenly bounce sharply. Nancy’s beer spilled all over her, and with no reassuring announcement from the pilot, both Nancy and I looked at each other and literally started saying our "Goodbyes" believing we were going down. Fortunately, it was not as bad as it seemed, but it sure seemed scary at the time. When we landed, quite unusually the pilots stayed locked in their cabin, no doubt not wanting to face the passengers who like us were none to thrilled with their flying skills (or ‘bedside manners’).

We were picked up at the airport by the developer of our housing complex, who said he owed a ‘favor’ to the owner of our rental home. Whatever the reason (more likely he wanted to ‘sell’ us a house, as later appeared), we were quite happy for the ride, which included a brief car tour of the town late a weekday evening before dropping us off. After our harrowing flight, we were very pleasantly surprised when we opened the doors to our rental home. The description and pictures from the internet ad definitely did not do it justice. The place was awesome – probably the best we’ve stayed in so far. With an open central courtyard with beautiful plants, flowers and vines, the first floor is an open veranda all around, leading to each of the enclosed rooms: First, the beautiful and spacious front den/living room, with not one but three cushy and comfortable sleeper couches, a wood-burning fireplace and a 42in. plasma cable TV. The combo kitchen and dining room each have domed ceilings with really nice mood lighting, and of course the kitchen was fully equiped with all of the newer appliances. The downstairs is completed by the two guest bedrooms, one of which as a queen bed, desk with internet connection and large color cable TV, and the other with two twin beds, and a full bathroom between them, plus and extra half bath adjoining. Then, you go up the spiral stairway leading to the 2nd floor masterbedroom with huge walk in closet and large bathroom. The laundry room is next door. And then the remaining upper floor, is a complete sundeck, with a view of the monsterous dormant Volcano (Volcán de Agua) that overlooks the town of Antigua.

The town of Antigua itself is quite similar in many ways to our impression of San Miguel Mexico. It is a fair sized colonial town with cobblestone streets and a beautiful central square and Cathedral. Also, like San Miguel, it is ‘infested’ with ex pats from the USA who have come to live here, which of course, means the prices in the town have risen for the occasion. On the plus side, the infrastructure has really been built up, with many fine choices for dining, drinking and shopping. The surrounding scenery is also spectacular, since the town is ringed by several volcanos, one of which called Volcán Pacaya is extremely active and tours are offered with a chance to walk over hardened but still warm lava, and close-up views of still glowing and flowing liquid lava.

Of course, our good friend Mike Shaker (a/k/a "Monk's Pub Mike") from Chicago visited us as usual (his 5th visit during our travels), and he rented a driver for a couple of days. One of those days, we drove about 2 hours to the town of Panajel and its famous adjoining Lake Atitlan, which Aldous Huxley described as the "most beautiful lake in the world." Formed thousands of years ago in the crater of a massive volcano and surrounded today by several other towering volcanoes, Lake Atitlán certainly is scenic. I’m not quite sure any of the three of us were quite as impressed as Huxley, but it was definitely enjoyable to rent a boat and tour around to several different lakeside villages and towns. On the second day of our driving tour, we went to the nearby well-known market town of Chichicastenango which is reputed to be the largest and most famous of Guatemala’s open-air markets, with hundreds of stands selling everything from handicrafts and flowers to household goods and furniture. Then we visited a couple of other villages nearby to Antigua, including San Antonio Aguas Calientes, which is inhabited by local indians known for their fine weaving.

On Sunday, May 3, Nancy and I experienced our first ever EARTHQUAKE. A strong quake with a magnitude 6.1 on Ricther Scale, struck nearby only 68km west of Guatamela City. Fortunately, it was deep underground, so no major injuries or damage. But, we certainly felt it (the whole house was shaking for about 20 secs., and Bob really thought it might collapse). Supposedly it was felt as far away as Mexico City!

During our stay in Antigua, our ‘developer friend’ also kindly invited Bob to join his Poker playing group, which included some well-known local entrepreneurs, most notably Mary Lou and Jay Rittinger. They are Archeologists who while digging around back in the 1970’s discovered a long lost Jade Mine, and surprisingly were able to lay claim to it and have become quite wealthy as a result. They are also ‘famous’ locally, and visiting dignitaries such as former President Bill Clinton and Harrison Ford (who Jay vaguely resembles in his Indiana Jones character from photos of the period especially with his ever-present jungle hat which Jay says he wore first!) have all paid their respects while being given a personal tour of the Rittinger’s Jade Factory and Museum. This Poker group became a once-a-week afternoon social gathering for Bob with some very nice upscale expats. (Update: Sadly, about a month after we left Antigua, we received word that Jay Rittinger had passed away after his lengthy battle with Cancer. He had been quite ill even during our stay, joining our Poker group in obvious pain in a wheel chair carried out from his Van by his private nurse. But it was still an honor and pleasure to have met and gotten to know him a little).

Our concluding impressions of Antigua (and Guatemala) are that it is an interesting place to visit, but we would never consider permanently residing here. Indeed, it was never a consideration, but we merely stayed here in passing awaiting our next destination to ‘dry out’ from its rainy season. The biggest problem with living here, is that Guatemala’s reputation as a dangerous and violent country apparently remains very much true today. While the town of Antigua itself appears to be a ‘safe haven’ due to the government’s interest in promoting tourism here, you are constantly reminded that this is only due to the multitudes of heavily armed (machine-gun toting) police patrols, and shotgun-toting private Security Guards that almost every shop in town has (even a Subway Sandwich shop, if you can believe that). Despite the heavy police and security presence in town, you are still warned by locals and all of the travel and tour books to keep your wits about you when walking outside the central colonial area; never to take the local inter-town Buses; and, that you must be accompanied by private Security when you venture anywhere outside of town, even for a hiking tour to the Volcanos. Frankly, we don’t really want to live in a place where we feel like prisoners afraid to venture beyond the pocket of safety offered by our beautiful but small colonial town of Antigua.

NEXT UP: We fly tomorrow, May 21, to Quito ECUADOR, where we are planning to temporarily reside for the next 3 months. 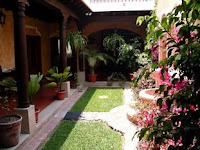 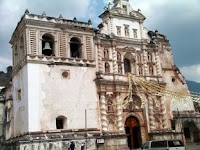 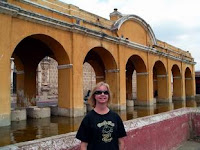 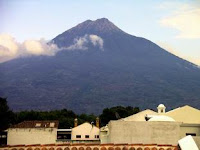 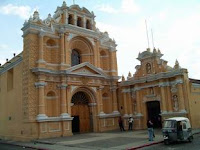 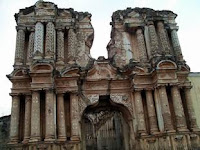 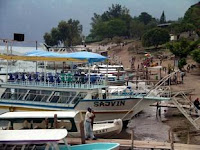 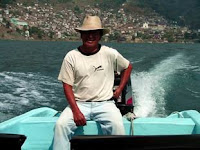 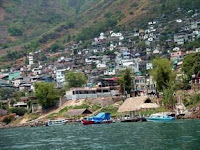 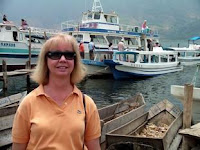 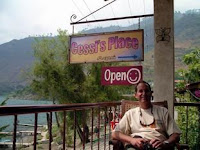 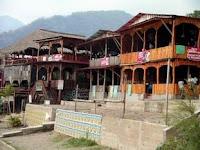 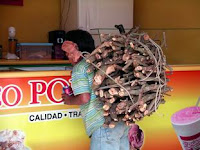 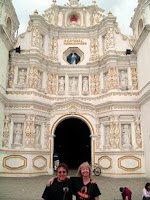 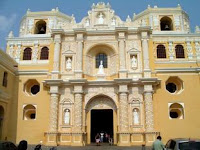 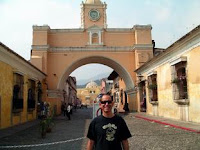 Posted by Bob and Nancy Morton at 4:02 PM No comments:

Yesterday, Sunday May 3, 2009, a strong Earthquake measuring 6.1 on the Richter Scale, struck 68km west of Guatemala City. We are staying in Antigua, which is about 45km southwest of the City -- so actually closer to epicenter of Quake. Fortunately, it was apparently deep underground, so no major damage or injuries were reported. But according to news accounts, it was reportedly strong enough to be felt as far north as Mexico City. And, here in Antigua, we definately felt it. Lasted about 20secs. Our whole house was shaking and swaying. A bit frightening for a "first-timer". Of course, Guatemala has suffered major Earthquakes several times in the past, which have indeed caused serious destruction. Generally speaking, Central America is a very geologically unstable land mass, which as previously noted is full of Volcanos and shifting tectonic plates.

Posted by Bob and Nancy Morton at 3:06 PM No comments:

This Past Week, April 30, 2009, we celebrated our one-year Anniversary of international travel and living. A major milestone. Of course, our good friend Mike Shaker (owner of Chicago's famous Monk's Pub), was here in Guatemala to celebrate with us! We continue to enjoy our new life abroad, and do not miss the USA. Looking forward to our coming year of continuing new adventures in distant lands.

Posted by Bob and Nancy Morton at 3:01 PM No comments: